Posted on August 22, 2019 by christianwarrenfreed 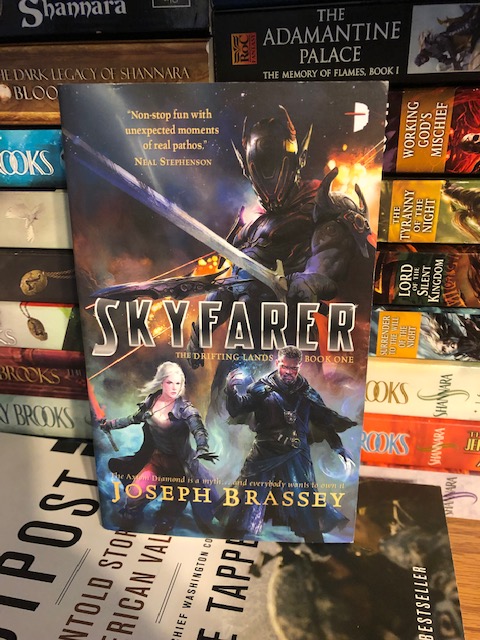 This was an easy one for me. The original Star Wars was the very first movie I ever saw in theaters- a drive in theater no less- back when it first came out. I was hooked after that. Fast forward a few decades…ahem…and I not only read but write what I grew up loving. As is my wont, I peruse the local book store shelves once or twice a month, looking for the latest volumes from my favorite authors or something that might catch my eye. The Mrs. isn’t a big fan, probably because I have well over 500 books sitting around. But enough of that.

The cover art for Skyfarer drew my attention. My only complaint is one of the main characters looks like Samuel Jackson’s Nick Fury in space. The story is about is about a small crew who use magic to guide them to different parts of the world where they generally get into mischief or try performing some grand deed (it is the trope after all).  Things get hairy for this crew when they plop into the middle of a war of sorts and it soon develops into a treasure quest.

I enjoyed the characters and the story arc, even how the pride of the bad guys is suddenly cast out and realizes he was a major d bag before (after having no choice) to turn good. It all makes more sense with the 2nd volume. Perhaps the best part of this book is that while the series is related, the books are stand alones. If you’re looking for action, adventure, some dark magic, and that old time feel of a Robert E Howard tale, this might be the book for you.