Posted on December 16, 2019 by christianwarrenfreed

Ok, technically we should be on day7, but sometimes you just need to sit back and take the day off. Especially to watch the Bills beat the Steelers and get a solid spot in the playoffs. Let’s Go Buffalo!

Law of the Heretic has a long backstory. I started writing it when I was in high school, got over 120 handwritten pages into it and decided, wow this sucks. I shoved it in a folder and forgot about it until 1997. I was back in Korea for my second tour. This time was different. I was married, low on cash, and not the wild 18 year old I was the first time the Army sent me to the Land of the Morning Calm. I needed something to do that didn’t cost me. 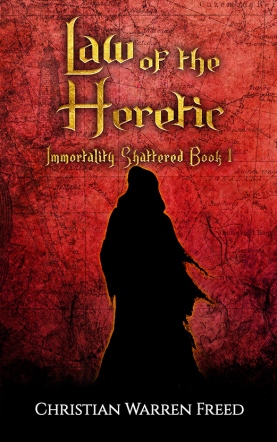 I broke out the old manuscript and tore it to shreds. I used some characters, a few plot points, and cranked out a brand new story (which didn’t see part 2 until 1999 and didn’t see parts 3 or 4 until a few years ago). I’m happy with the result and you should be to. A brand new adventure with new races and a new world. Ps. My editor claims this is every bit as good as Game of Thrones. Who am I to argue?

Law of the Heretic: Immortality Shattered Book I

The time of peace is ending. Betraying his oath and bond, the Black Imelin murders former friends and sets out to find the lost Staff of Life. With it he will bring the Free Lands to their knees.
Author Christian Warren Freed brings a new world to life with Law of the Heretic. Filled with dangers, monsters, and creatures hidden for centuries, Immortality Shattered delivers the same intense action and character driven world building combined with his military experience that fans worldwide have come to enjoy.

A small band of heroes assembles but success is far from guaranteed. Life and death hang in the balance and the future is in doubt.

Start the epic journey of two men struggling with what they are and who they were meant to be.