Posted on December 31, 2019 by christianwarrenfreed

We’re getting down to the end of the road here. I only have a few books left to introduce and then we can assault the new year and own it. Who’s with me on that? This one came from a time when I was newly retired and exploring my creative options- and trying to make sense of being out of the Army and in the real world. No one tells you how disorienting and confusing and actually cold civilian life is. There is no camaraderie like in the military. No unity of purpose. To be blunt, people are generally assholes to each other. Hard pass on that one.

So I wrote Melvin the Reluctant Monster. The premise is simple. A young monster doesn’t want to be a monster. He wants to be a kid. Melvin, worried about disappointing his father, goes to Angelina’s room to frighten her. Instead, he winds up being scared. The two become friends and, well, I won’t spoil the ending. Enjoy. 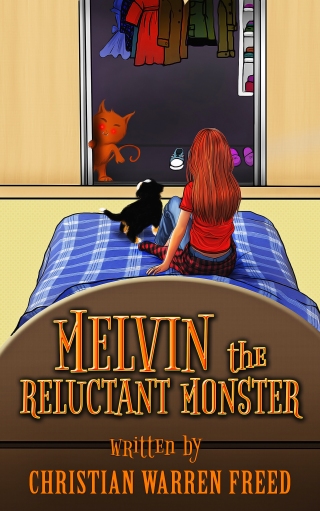 Parents are responsible for teaching their children the virtue of friendship yet too often we wind up placing too much parental pressure. Melvin comes from a long line of successful monsters. His father sends him off to go scare his first person, young Angelina. Melvin gets to her room only to find he can’t scare her. Frightened himself, Melvin runs home and tries to hide his failure from his father, knowing he wouldn’t understand. Melvin goes back the next night and slowly becomes friends with Angelina. They slowly become friends and Angelina helps Melvin show his father just how good a monster he could be.